Home of the Knight Dragons Shifu Evert (Ave) Vink, one of the original disciples of Master Su, started the Durban Shun Wu Tang Centre in 1986. Since then, it has been the home of the Qishi Long (The Knight Dragons): the name that was given to the dedicated students of the Durban Kwoon/Guan (training hall/school).

Having studied under Leo Sebregts at the Shaolin Martial Arts Centre and becoming a “senior instructor” , Shifu Ave together with a few other senior instructors, decided that they wanted to switch to authentic Traditional Chinese Martial Arts after seeing a demonstration by Master Su Chin Miel. Master Su came to South Africa as an ambassador of Taiwan and inspected the level of Chinese Martial Arts in South Africa. He was very disappointed with what he found and after countless pleas from various individuals, he decided to teach a  select few, his authentic heritage.

Shifu Ave and the others, under went a serious 365 day-per-year training program to get them up to the necessary requirements to start instruction in the Shun Wu Tang system. This was a no-nonsense approach to training and Master Su accepted no excuses for not training. The seniors sacrificed family, friends, and careers in order to meet the rigorous requirements that Shun Wu Tang expected, paving the way for the future generations.

The Smith Street Kwoon was started in 1990 (relocated from Umbilo), above the Tong Lok restaurant in a Chinese style building. The Kwoon had two floors of training and housed the 20 man Dragon, Kou Tai, awarded to Shun Wu Tang by the Taiwanese embassy. The school was home to many professional fighters and sporting champions, and due to Shifu Ave’s military background, it was also a training ground for the special forces in the police and military. In 1993, the Kwoon moved to the first floor of Kayrod House in Winder Street where it boasted a much bigger training floor, and separate sparring floor with wall to wall Lei Tai mats. The Kwoon donned the official SWT colours and Chinese theme, together with huge mirrors, weapons racks, punching bags, speed balls, free weights and exercise machines, change rooms, visitor’s area, office, stock room, and once again housed Kou Tai. Shifu Ave taught various classes besides the regular junior and senior, group classes. He held private training for his military students, as well as self defense classes dealing in urban conflict and crowd control. There were Dragon Dancing classes on Saturdays, and various sparring and invitational fight classes. Many other full contact styles would come to train with us due to our involvement in Kuoshu full contact fighting (at the time, regarded as the world’s most brutal full contact sport! see article)

When Shifu Ave passed away in 1997, his senior students assumed responsibility of the class until SWTSA appointed a new instructor to run the Kwoon. This instructor could not handle the leadership of such a large and highly developed school, so he backed down, leaving the school abandoned. The school was forced to close down, but the Qishi Long continued their training privately under the guidance of Shifu Malcolm Hansen, Head of Shun Wu Tang South Africa, as well as Chairman of The South African Kuoshu Authority.

The last remaining Knight Dragons had to travel to Gauteng every month (sometimes twice a month) to gain new knowledge. They had to overcome various hardships including car accidents, attempted hijackings, and numerous physical injuries, to continue their training. In 2003, Shun Wu Tang Durban was officially re-opened to the public, due to constant requests from Traditional Chinese Martial Arts enthusiasts. Many martial artists from various styles approached the seniors wanting to learn this ancient warrior art, being unsatisfied with the new approach that modern martial arts was taking, as well as the extremely high prices that some were charging at flashy (looking)schools, boasting to teach traditional martial arts, but with no lineage or roots.

The Qishi Long, realizing that there was a need for their system, to be taught to the eager public, started training and teaching at the Durban Thekweni College. Classes were held on Tuesdays and Thursdays, and consisted mainly of students from other styles of martial arts who had encountered the Knight Dragons either in competition or saw them at competitions. Due to the increasing number of students, the school relocated a year later to the Sherwood Community Hall, where more training time was allocated for  junior and senior classes. The Kwoon sought to reestablish its name in Traditional Chinese Martial Arts by growing and spreading its knowledge. In 2006 the Qishi Long brought back 11 medals at the South African Kuoshu Championships including overall tournament champion. After a nine year lay off from the  tournament circuit, Shun Wu Tang Durban had made its presence felt, and will continue to do so. 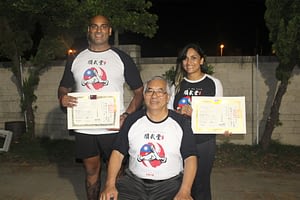